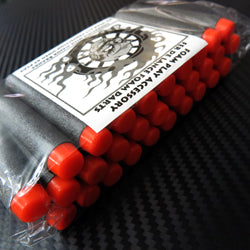 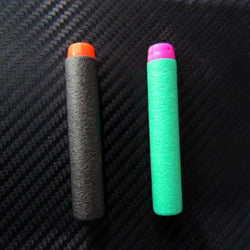 The Tip of the Lance in French = Literally the "iron of the lance." Ferum = Iron in Latin. A symbolic meaning of the "Tip of the Spear"; the cutting edge of research / warfare / knowledge.

- 1 set comes with 30pcs
- Fits Nerf Streamline Magazines
- Low density Shoots much further than original streamline
- Increased Accuracy from weighted rubber head
- Increased Flight time due to low density
- More predictable flight path
- Black manly body
- When shot, the hollow section will expand slightly to fit the bore and provide a good seal within a fraction of a second .
- The solid head in the front and the hollow in back will work to prevent the pellet from tumbling

Band New out of the box, the ferdelance is thicker and stiffer than others, excellent durability and accuracy for flywheels and streamline Blasters. When converting it to Stefans for Blasters like the Jetblaster Xzeus, roll it on the table with your fingers to prematurely age and soften it, making it fit and seal with the Xzeus barrel perfectly, thus the older it gets, the better it becomes. compared to other Brands of darts that are already smaller, when they age they become smaller than the barrel thus leaving the barrel erratic with a lower Velocity.